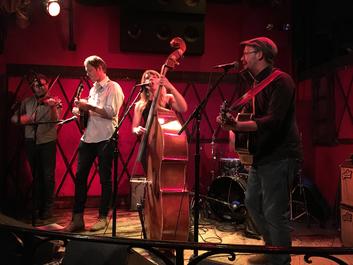 The group has released three full length albums to date.  “On Willow Street” (2010) was recorded in Hoboken, NJ and features a rowdy and upbeat performance of mostly original tunes.  “Family Album” (2012) recorded in Brooklyn, NY and includes a collection of traditional folk and children’s songs that are great for both kids and adults alike.   In 2016 the group released "TWB" which was produced by Jason Borisoff and features Zack Bruce (mandolin) and Sam Barnes (fiddle).

Catch a The Third Wheel Band show in and around the New York area and feel to reach out to them at thethirdwheelband@gmail.com for more info or questions about the band.

The Third Wheel Band is an American roots group from New York City led by Ryan Langlois and Steph Allen. Since the beginning in 2010, the band has made a name for themselves with their infectious style of feel-good old timey music.

​​Known for their energetic live shows, the band has been described by The Huffington Post as "impossible not to dance to" and "New York's best hidden bluegrass treasure." ​